Fantasy or Reality: Zero Net Energy Homes Not Worth It If Price Too High

Self Powering Dwellings Like ZeroHouse Good Idea, But Not At $500 per Square Foot Price 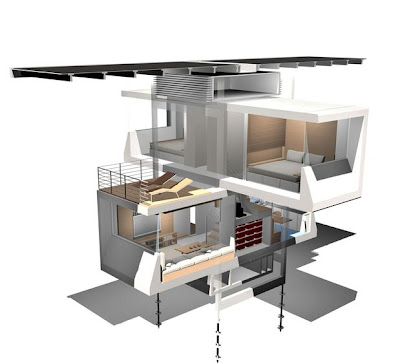 When you read about the $500 per sf ZeroHouse design by NYC-Austin architects, Scott Specht and Louise Harpman, you wonder if only Saudi Sheiks can afford zero net energy homes and not working-class greenies who listen to Duncan Sheik in their old VWs. I mean, there's green - and then there's "green" i.e. money - and saving the planet makes no sense when you price yourself out of a roof over your head.

I've been in several Zero Net Energy homes in the Hudson Valley of New York. Trust me, these homes can be built affordably. My favorite example is one in the New Paltz area that looks like a country farmhouse from the distance. It cost less than half of what ZeroHouse is reported to cost. 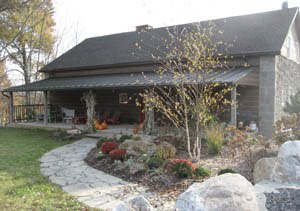 As New York House magazine reported about the zero net energy farm house: "This rustic-looking home set on a meadow overlooking the Shawangunk ridge was built using a repurposed antique timber-frame barn and has antique hemlock flooring and a gracious great room-style dining and kitchen area, anchored by a large stone fireplace. An 8.5-kilowatt solar photovoltaic system meets the home's electricity needs and is used to power its geothermal heating and cooling. The owners learned from a previous home they owned nearby to place most of the windows on the south side, and just three small windows on the north side, optimizing solar gain while reducing exposure to bitter winter winds. The building envelope of Structural Insulated Panels comprised of plywood sheathing, 6-10 inches of EPS foam and sheetrock, combined with R40 roof insulation and R26 side walls make for a house so tight a whole-house ventilation system was installed to ensure air quality. The result is a net-zero-energy, Energy Star-rated house."

Check out an article here that reports on the zero net energy home depicted above and below and other green homes in the Hudson Valley. 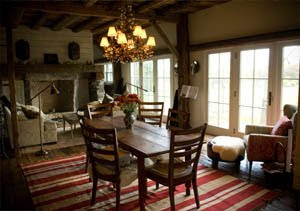 A zero net energy home design that is also priced closer to reality than fantasy is the House About Saving a Planet (ASAP) which received a barrage of publicity in the Hamptons and around the green blogosphere a few years back. (See picture below.) Laszlo Kiss, the architect who built the house in Sag Harbor, told me he can deliver a house like the one he built for himself at a retail cost of about $255 a square foot. This includes a 10kw PV system and a Geothermal HVAC that makes the house 65% energy neutral. Kiss has another modular home design he is marketing through his line called ASAP Modular. The price tag for this finished house with full basement, 6 kw PV array and Air Heat Pump HVAC is between $230 sf to $250sf, depending on the location. 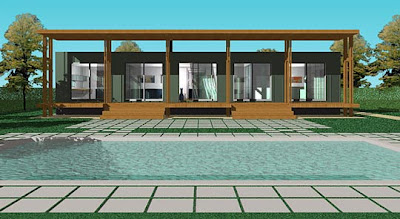 Just as I was finishing this post, Jetson Green published an item about The Eco-Cottages which is a new line of modular homes that will be built in Martinsville, Virginia. One and two bedroom homes are priced between $50,000 and $100,000 and are ready for renewable energy installations. This seems to be in the $100 per sf range, not including installation. The Eco-Cottage designs are really great. From modern to more classic looking structures, the buyer has choices that could fit well into different kinds of neighborhoods and communities.

Above, Picture of a beach Eco-Cottage--a new line of green modular homes

It's cool to have the pricier options for the more privileged among us. However, the zero net energy home concept, whether the design is modular or not, won't really take off until the homes are priced closer to earth than the space aged prices often thrown about for this "futuristic" concept. Indeed, the concept of self-powering homes is not so futuristic after all, especially with affordable designs like the Eco Cottage coming onto the market. Anyone looking to build a house who doesn't look into these green, affordable options with built in renewable energy systems is surely missing the green boat that's taking off like the Nina, Pinta and Santa Maria on the way to discover a glorious new world. 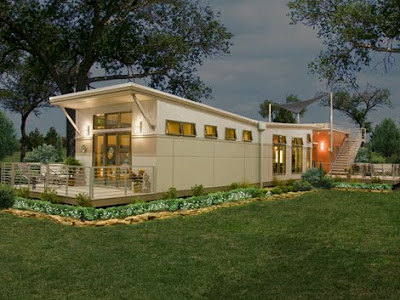 The i-House from Clayton homes is another affordable, green modular concept that can be made zero net energy. They are reported to come in at a cost of about $100 per sf, not including installation and the optional renewable energy systems. Add-on amenities include solar panels, tankless water heaters and rainwater collectors. Yes, they look a tad like mobile homes. This is no suprise since Clayton Homes is one of the largest manufacturers of mobile homes in the country.

Check Out Jetson Green's article about the i-house--news coverage from when the homes were first announced in May, 2009.

Find out More About Green Building: Order Some Good Books  on the Subject

Who Killed the Gas Car: Electric Car Companies of Course 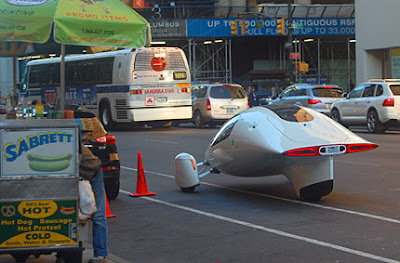 With all the buzz about electric vehicles at the recent Detroit North American International Auto Show, the 2006 film, "Who Killed the Electric Car", seems like an old science fiction movie. The idea of the electic car being killed by some grand oil and car company conspiracy is so outdated. It seems almost as silly as those films directing school kids to crawl under a desk in order to protect themselves from nuclear war heads heading at any moment in the school's direction.

Last week, NYC Mayor Michael R. Bloomberg announced the results of a study on what City government and other sectors can do to foster the usage of electric vehicles (EVs) and what factors would lead New Yorkers to drive them. The study, developed in partnership with McKinsey & Company, a global management consulting firm, found ways to facilitate adoption of EV technology and heralded a bright future for EVs in the Big Green Apple.

In 2008, the New York State Department of Motor Vehicles reported that there were approximately 1,750,000 cars registered in the five boroughs of NYC. Based on data in the new PlaNYC Report, NYC residents will buy 70,000 Electric Cars by 2015. Most of these are likely to replace older cars. This means that in just 7 short years nearly 5% of cars owned by residents in the Big Apple could be either battery or hybrid electric.

This is great news for NYC's near future since EVs are so much cleaner for the streets and atmosphere. And, with solar power to charge the cars, it's win-win all around. NYC is greener than most people think. For instance, New York City already has the largest clean-air-diesel-hybrid and compressed-natural-gas bus fleet in the United States. What's more, bicycle lanes are being integrated throughout the city and more than half of all households in NYC do not have cars because the public transportation system is so affordable and extensive. (In comparison, approximately 90% of all households in the United States own a car.) 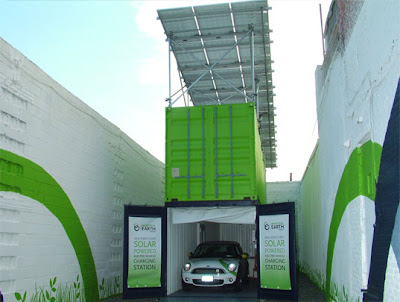 There are lots of smart New York companies, big and small, who are gearing up to have EV charging stations to service all the new EVs soon to invade NYC. From Brighton Beach through Manhattan and north to the Bronx the electrification of Manhattan vehicles is going to happen faster than we might imagine. Large residential buildings are already starting to add the EV charging amenity. To name a few--the Helena, a rental tower at 11th Avenue and 57th Street, and many of the buildings in Battery Park City, like the Verdesian and the Solaire, have EV charging stations already.

California-based Coulomb Technologies has an EV charge network called ChargePoint and is surely to be a big player. They have started to establish themselves on Long Island and in NYC. The New York Times reported that Coulomb installed four EV charge stations for electric cars in a 400-car parking garage at the 569-unit Emerald Green on 38th Street between Eighth and Ninth Avenues.

But, it won't just be huge internationally-branded EV charge station chains like Coulomb that will invade NYC a la Starbucks. Like local coffee houses that compete with the big corporate chains, there will be funky neighborhood charging points where locals kibbitz while waiting for their EVs to charge up. In Red Hook Brooklyn, a group called Beautiful Earth Group (BE) unveiled New York's first solar-powered electric vehicle (EV) charging station which charges its electric MINI E with the help of solar panels on top of an old cargo container.

Surely, grandmothers with homes that have driveways in Queens--(first in number of cars amoung the five boroughs)--will be parking their new EV cars under solar PV canopies that they will use to power the EV outings to the local Cineplex with the grandkids. Or, better yet, tell Santa to give electric granny a solar tree to "plant" in the front yard so she can charge her EV and electric lawn mower with it. After all, one must keep up with the electric Jones', and all their green gadgets, next door.

Posted by Paul McGinniss at 8:26 AM No comments: