Nick Rosen: Man on a Mission 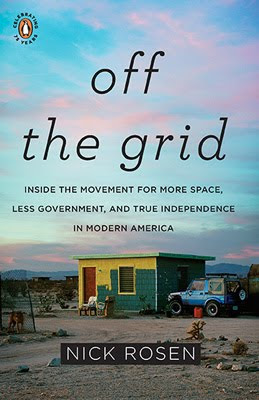 Confession: I am a big fan of Nick Rosen. He's raising money to support a new film called "Off the Grid and on the Cloud" and everyone should check out info about it on indiegogo and support the film. It's actually planned as a series of stories about a dozen efforts around the world to "go off grid" and become totally self reliant.

I just had the chance to do a phone interview with Nick while he was in the UK after getting back from China where he is filming a documentary on billionaires in China. When we spoke Nick reflected on the dramatic changes going on in China. Despite increased awareness, he explained how little is still understood by the general public about what is happening there and how it affects us in the west. He said: "A lot of people talk about the great Chinese economy and how it's going to be the number one economy in ten years time, but basically it seems for everybody like a black box."

Nick also reaffirmed what I have seen reported elsewhere, that despite the massive environmental problems resulting from China's incredible, fast paced development, the Chinese are actually at the forefront of renewable energy technology production and use of renewable energy. Clearly, development in China is interconnected with the world economy and environment. Nick reported: "In a way China is a very interesting example of the sort of reason that we are all going to have to make a radical change in our lifestyle."

Luckily, Nick's journalism and exploration of the Chinese economy, which is delicately intertwined with ours, will help shed some light on the good and bad of what is happening there, and help us determine the best steps for the world to take, collectively, as it is hurled into the 21st century.

During our dialog I asked Nick what he meant by the title of the film "Off the Grid and on the Cloud" and he said: "On the Cloud is partly about using mobile Internet - also about floating free as a cloud." 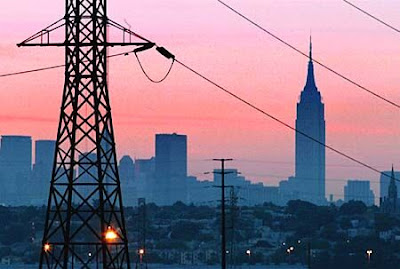 In 2003, the power grid failed in NYC, and residents were left without basic services and commuters were left stranded unable to travel. Picture Courtesy LightRailNow.org

Nick has written two books about living off the grid. His first was: "How To Live Off Grid", which was about people in the UK. His second book on the subject was: "Off The Grid: Inside the Movement for More Space, Less Government and True Independence in Modern America", which is about people in the USA. Interestingly, his idea of writing both these books grew out of him being in NYC during the huge blackout in 2003 where power in many parts of the USA shut down. A few years after experiencing the massive power failure in NYC, Nick drove across the UK and then the USA to document the stories of people who have gone off grid.

The book "Off The Grid: Inside the Movement for More Space, Less Government and True Independence in Modern America" has an excellent history of the American "back to the land" movement that started back in the 1960's and brings us into the present time. There's a great chapter in that book too which explains how the power grid came into being in the first place and the entire book is worth buying just to open
your eyes with the history of the grid and how and why it came to exist. (Another great book to read that explains a lot about the history of the grid is Big Coal: The Dirty Secret Behind America's Energy Future.

Nick Rosen also started an excellent web site - www.off-grid.net that is creating a global community of people who want to go off grid or already are. I read it regularly and consider it a must read. 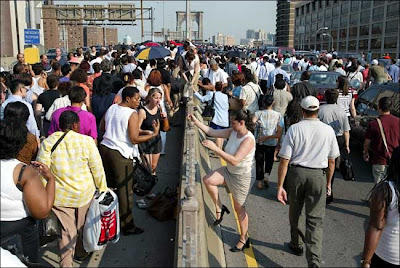 Picture of pedestrians in NYC literally taking over the Brooklyn Bridge in attempts to get out of the city during the 2003 Power Failure. Because of subways and trains being shut down millions of people trying to exit the city blocked traffic causing massive traffic jams. Picture Courtesy LightRailNow.org


Personally, my goal is to become independent from the grid in the near future and it's totally inspiring to see people across the world all unifying in the common goal of being more independent and more resilient. The "grid" was invented only 125 or so years ago so this avant garde concept of living "off grid" i.e. not relying on centralized energy sources (or food sources or other fragile networks) is really, going back to the future.

To conclude, I have to add, I'm excited that Nick will be part of my upcoming Ebook, Survival Cool, which includes information from stimulating talks I've had with some other really awesome people like Sylvia Earle, Fabien Cousteau and Ray Kurzweil, all of whom are part of the change agents who are actively trying to make the world a better place.

Click on the image below to see info about how to support the film "Off the Grid and on the Cloud" and help support this film which will capture the worldwide movement to go off grid.


Posted by Paul McGinniss at 6:28 AM No comments: