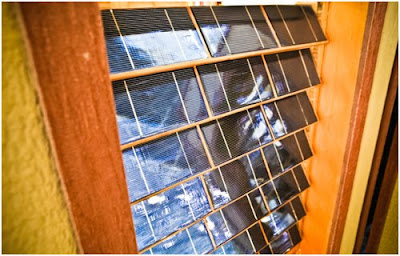 The Solar Shutter by Plug N Save Energy Products is made with Bamboo with thin film PV incorporated.

The Solar Shutter from Plug N Save Energy Products is the latest in a new wave of increasingly cheaper, thin film, self-install solar technology products that will help bring affordable DIY Solar Photo Voltaics to the mass market.

San Diego, California-based Plug N Save, led by a father-son team, Dan and Dave Curran, launched their debut product in Fall, 2010 so they could “create an easy way for people to produce their own power and a viable, small step entry into personal power production.”

Plug n Play solar PV systems, basically, allow you to take solar-generated energy and plug it directly into your home electrical system via an electrical outlet. For grid-tied homes, the systems come with inverters to convert the solar generated DC power to AC. (For those off the grid, the DC power generated by the PV can be tied directly to DC lighting and appliances.)

What's great about Plug N Play systems is there's no need for complex installation thus reducing a large cost of solar systems as they are typically installed today. Another great thing about the Plug n Play products is they are portable, meaning, if you “plug n play”, the investment doesn't have to stay tied to a piece of real estate. You can take it with you when you move, so even renters can make the investment. 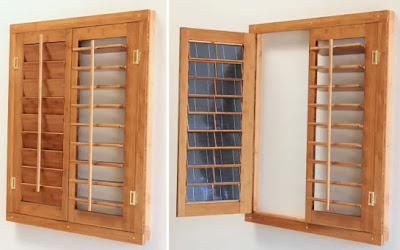 The Solar Shutter from Plug N Save Energy Products can be made in custom sizes.

I spoke with David Curran, co-owner of Plug N Save and co-inventor of the Solar Shutter, about the flexibility of their PV shutter concept. He elaborated: “Our shutter functions very similar to that of the solar arrays that people place on the roof.  It is possible to hook that up into your DC lighting (via) a battery bank or direct wired through an inverter.  For an off grid application, I would recommend hooking the shutters up directly to the system you have in place.  This shutter will then serve as a supplement to what is already in place.”

I asked David if most people net metered (meaning: to sell the surplus power generated back to the grid) after installing the shutters and he reported: “How this system works is the homes will actually use the power from the shutters first because it is the grid-tied inverter which sends the power collected by the PVs directly into the wall and into the system.  So, if enough power is produced by the shutter system that the home is fully offsetting their usage, then they will need some sort of net metering in place.” He explained, when I asked for details on the inverter's component: “The shutter does not directly come with an inverter because we want to allow for the freedom of the owner to be able to hook it into a system they already have or to use a grid-tied inverter that we also offer as an add on for the shutter.”

Many other portable power options are in development. Veranda Solar's Plug N Play concept (pictured above)was designed so it could be affixed to windows or balconies. Panels can be snapped together and plugged in directly to an outlet. (Not available commercially, as of yet.)

So, how easy is it to actually install a Solar Shutter? David explains: “As far as the set-up goes, the grid-tied inverter allows us to make this a DIY application. The inverter is capable of inverting a 250 watt system. So, for systems about that size, this can be installed on your own and is relatively easy to do so. If the system is bigger than 250 watts and you do not want a bunch of grid-tied inverters lying around, we recommend getting a certified electrician to help you either direct wire it or give you the best advice on how you can use the energy (i.e. battery bank).”

The Plug N Save web site explains the watts of power generated by different shutter sizes and the amount of usable power that results. David Curran explained a bit about pricing: “Our grid-tied inverter is capable of having 4 or 5 shutters at a 2x3 ft size hooked up to it. We do not have any prices listed on our website. If you were to ask for a quote from us on a 2x3 ft, it would retail for about $560.  We offer quantity pricing and are able to offer specials, also.  That price is to give you a basic estimate because each job is custom. So, no exact price is black and white, but that is the general area it would be in.  Each grid-tied inverter also costs $120.“

According to Plug N Save: “The PV Solar Shutter is the first in a series of sustainable, life-friendly energy products and solutions designed to make personal power production from renewable sources more accessible.” David Curran said, when asked about future products: “We definitely have a few products in the pipeline with our research and development that would definitely fit into this same category.  It is a condo-sized wind generator, but I don’t really want to go too deep into detail because we are working on some proprietary parts of it still.”


Click here for further info about pricing and the amount of power that can be generated by the Solar Shutters. 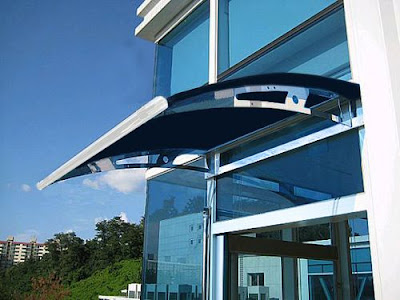 While the majority of us are still contemplating the return on investment for solar PV and solar thermal systems, many people around the world have eagerly embraced solar and other renewable technology. Granted, in many cases, this is because simple, DIY-style renewable technology is the only alternative to get power where there is none. For these parts of the world population, the many millions, perhaps billions, still accustomed to living without modern conveniences, there was no other practical choice for power except to use thin film PV and other small, renewable, energy-power-generating devices. But, we must not confuse hanging small DIY solar devices on windows, porches and rooftops with a third world mentality. Just because the underprivileged had no choice on how to get access to power does not mean we should not all make the choice they are making, especially now that so many affordable, self-install, portable renewable power devices are finally hitting the American market. Plug N Play products might have been developed first out of third world necessity, but we should all embrace this kind of thinking. 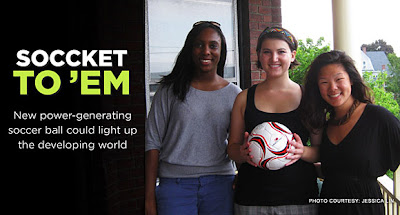 Plug N Play portable, renewable energy options will make PV price competitive with grid rates. As the cost of generating power DIY style reaches the price we are paying to the power company, we'd all be foolish if we didn't get a bit of the third world mojo and get some plug n play power systems to slowly wean ourselves from centralized sources of power, most of which are still fossil fuel based. 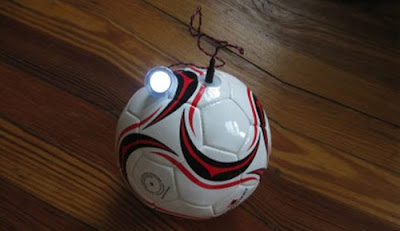 The Soccket generates power by its own motion and has a rechargeable LED light embedded into it which can pop out after a game.

Some of the most amazing technology and ideas are coming out of the third world paradigm and the whole world should get on board and be part of this creative vortex. One of the coolest products I found last year that was created for developing nations is a soccer ball light called the Soccket. It is charged by the motion of using the soccer ball. It has an LED light embedded right into the usable soccer ball. So, the kids using it can go home after the game and do their homework with the light.

Anyone who has kids or knows kids should buy them one of these balls for a present and inspire them to start powering and empowering themselves. Then, if you have a few extra bucks to splurge - go out and buy your significant other, family or friend their first solar shutter. Tell them there ain't no sunshine (see video below)when they're gone - but there's no reason why they can't generate a few killowats of their own while they're out buying you the solar backpack you've had your eye on.

Check out a Music Video of Bill Withers' 1971 Classic "Ain't No Sunshine" below.

Posted by Paul McGinniss at 7:15 AM No comments: