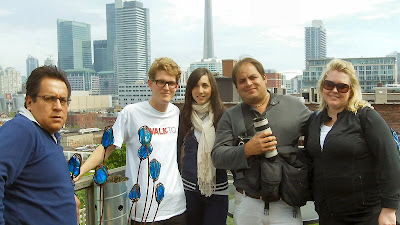 Picture of James Thoem from Walk T.O. (in white T shirt) with my awesomely cool fellow journalists on top of the Green Roof at the Robinson Building in Toronto. Left to Right: Francisco Frausto, James Thoem, Raquel Manero and Lisa Davis.

I had some doubts about the greenness of Toronto while entering the city for the first time from Pearson International Airport. I was invited by Tourism Toronto with four other journalists to cover "Living Green In Toronto" and the weather on arrival was gray and dreary. As I was whisked by car into the city, the blah weather seemed to be an appropriate back drop for the many new, generic, glass box condo towers I saw on the Toronto horizon that my driver melancholicly told me popped up in Toronto in a rash of development over the past ten years. At first glance upon entering downtown Toronto, thinking about the former, natural waterfront landscape lost to growth, there seemed to be a kind of urban sterility to the skyline and the highways. On the thoroughfare entering Toronto, amidst all this new development, I hardly noticed Lake Ontario off in the distance or observed any trees or vegetation anywhere. 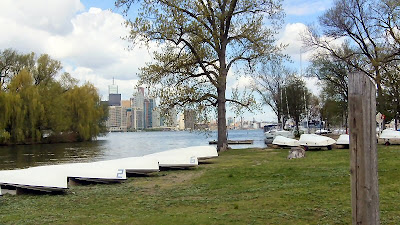 View of Downtown Toronto from Ward Island, an aquatic oasis that is part of a growing park system within the city.


Luckily, first impressions are not always correct. I learned during my recent trip that Toronto is, step by step, transforming itself, bringing nature back to urban development. A range of green initiatives are, literally, growing from the ground up, as well as being initiated from the top down. One transformative initiative coming from the top down is Toronto's Green Roof By Law, the first local bylaw in North America to require a green roof on all new development. Another city initiative by the Toronto Environment Office is the Eco-Roof Incentive Program which provides grants to promote green and cool roof retrofits on Toronto’s existing industrial, commercial and institutional buildings. (50% of green or cool roof costs, up to $100,000, can be given to building owners who take the plunge.) According to the Toronto Environment Office, the City is also actively planting trees. Torontonians have planted over 400,000 new trees over the last seven years with a goal to double Toronto’s tree canopy to 34% coverage. 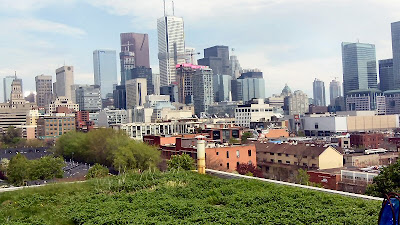 Looking at Toronto Skyline from a corner of the Green Roof at the Robinson Building located at 215 Spadina Avenue in downtown Toronto.

From the ground up, grass roots sustainability initiatives include those by Transition Toronto which is part of the world-wide Transition movement. One of the community programs Transition Toronto offers to help make Toronto more green and resilient is a workshop on organic gardening and permaculture. It includes hands-on teaching that introduces permaculture theory while showing how to apply the concepts to your home or community garden.

So, despite perhaps not being so obviously green upon first glance, by the end of my trip I found myself inspired by the green wave washing over Toronto. And, with so many more trees being planted on the ground and so many more green roofs coming to the city, Toronto could blossom fully into a lush, green urban landscape that could rival the sustainability of any of the other world cities which are also trying to balance economic growth and development with a healthy, sustainable, locally-powered resiliency. 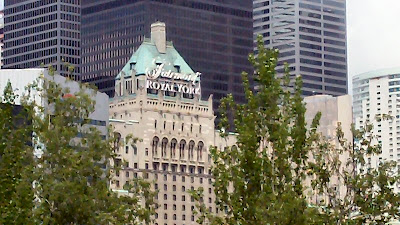 Picture of the Grande Dame, Fairmont Royal York, in the heart of downtown Toronto. This famous hotel was one of the first buildings in the city to grow food on the roof. It has bee hives along with an herb and vegetable garden on a 14th floor rooftop.

What's cool about Toronto's green wave is that visitors to the city can easily explore and see first hand what is going on. Here are two suggestions for green minded trekkers heading to Toronto:

**Fairmont Royal York Hotel offers an Urban Forest Excursion package that includes a walking tour with arborist, Kent Nielsen. It's a fantastic way to learn about different kinds of trees and the importance of caring for them, all the while enjoying the streets of the city. The package also includes a tour of the hotel's rooftop herb and vegetable garden on the 14th floor of the hotel. (FYI: There are awesome views to enjoy.)

**And, if green globe trotters want to see some of the inspiring green roofs popping up in Toronto, you should definitely seek out James Thoem at Walk T.O. He does a great Green Walking Tour and can get you up on hidden green roofs with spectacular views of the city. James was passionate, yet fun, and by the end of the tour we all felt like we had met a new school chum. Check out the video of James below as he talks about green roofs in Toronto.