How Big Bucks Competitions To Solve Problems Are Changing the World 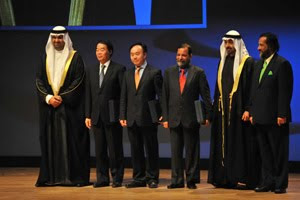 What's the incentive to solve worldwide problems so large the solutions almost seem impossible? How about multi million dollar prizes and access to the most powerful people in the world to realize your dreams? In the past few years there's been a renaissance of world-changing competitions that are sparking international scientific research and creating incredible, socially-conscious dialog. This groundbreaking paradigm is called incentivized competition. The dynamic competition process unifies students and corporate leaders, academics and entrepreneurs, world leaders and diverse populations.


Here are some of the World Competitions that were established to tackle specific problems in exciting and profound ways:

One of the coolest prizes to be launched in the past few years is the Zayed Future Energy Prize which was started by the United Arab Emirates in 2008. The prize is named after the late Sheik Zayed bin Sultan Al Nahyan, the former ruler of Abu Dhabi and founding father of the U.A.E. The yearly prize awards $1.5 million to individuals, NGOs, corporations or other organizations "for their excellence in the innovation, development and implementation of sustainable energy solutions." Up to two finalists will also receive $350,000 each. The prize "seeks to encourage innovation across a wide spectrum of renewable energy solutions, energy conservation and sustainability."

The Zayed prize demonstrates the amazing interest around the world in these large prize competitions. In 2009 there were just 204 entries to the Zayed Future Energy Prize, but the 2011 Prize competition has exploded to 633 entries from 86 countries. (Applications for the 2011 prize are open until Oct 8, 2010.)

The Zayed prize also demonstrates the range and diversity of organizations that participate in this open source, international exchange of ideas. The 2010 Prize was won by the large corporation, Toyota, for the company's groundbreaking fuel efficiency system in the third generation Prius. On the other end of the spectrum, one of the other winners of the 2010 prize was International Development Enterprises which was selected for its successful deployment of low cost, energy saving irrigation technology for small scale farmers in India. Judges for the 2011 prize include architect extraordinaire Lord Norman Foster, Olafur Ragnar Grimsson, President of Iceland and Susan Hockfield, President of M.I.T.

The X Prize Foundation has a motto: "Revolution Through Competition". Revolutionary, indeed. The foundation is an educational non-profit that designs and administers competitions with prizes of up to $30 million. Yes, you read that correctly--up to $30 million dollars! That's serious money and it's no surprise there's great interest from Pakistan to Peoria in the X Prize competitions.

I've been to X Prize events and I can tell you what they are doing is incredibly exciting and inspirational. The foundation was established "to bring about radical breakthroughs for the benefit of humanity." The X Prize Foundation states: "We believe that a small group of people with passion for a cause can achieve that which has never been attained. This is why we stage competitions that challenge issues that matter most."

The Progressive Automotive X PRIZE was one of the latest efforts from the X PRIZE Foundation. Three teams were awarded part of a $10 million purse for developing super fuel-efficient vehicles. The Progressive Insurance Automotive X PRIZE was launched in 2008 to inspire a new generation of viable, safe and super fuel-efficient vehicles capable of achieving at least 100 miles per gallon or the energy equivalent (MPGe).

The X PRIZE Foundation, like the Zayed Future Energy Prize, also focuses on needs in the developing world. It is now working on a new prize with the Government of India’s Ministry of New and Renewable Energy and the Indian Institute of Technology to create a global competition to develop and deploy clean and efficient cookstoves. Details of the competition, including the announcement of the launch date, prize purse and competition guidelines, are forthcoming.

The Government of Scotland has organized a 10 million pound competition to seek the best ways to tap into the world's wave power to generate clean electricity. The purpose of the Saltire Prize is "to stimulate innovation across the world that will lead to delivery of commercial scale wave or tidal stream energy technology." £10 million will be awarded to the team that can demonstrate in Scottish waters a commercially viable wave or tidal stream energy technology that achieves the greatest volume of electrical output over the set minimum hurdle of 100 GWh over a continuous 2 year period using only the power of the sea. Applications are due by 2015.

The Scottish Government was motivated by a number of factors in setting this challenge including the following. Inspiring innovation that will help to harness Scotland's immense marine energy resources and achieve the national renewable energy target of 50% of Scotland's electricity consumption being generated through renewable sources by 2020. And, inspiring innovation that will help to achieve Scotland's carbon reduction target of an 80% reduction in emissions by 2050.