How To Avoid Flesh Eating Ghouls In The 21st Century
(Or, was that How to avoid becoming a flesh eating ghoul in the 21st Century?) 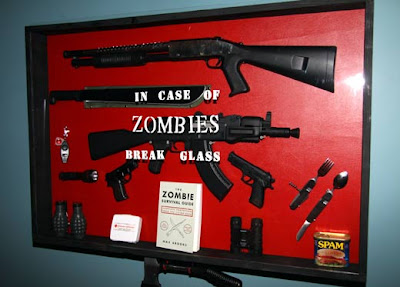 In Case of Zombies Photo via InCaseofZombies.com


In the wonderfully bleak post-apocalyptic film, "The Road", an endearing father and son team travel a barren landscape trying to stay alive. 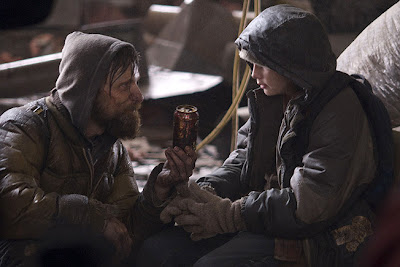 Miracle of Miracles - the father & son characters in the film, "The Road", manage to find what is apparently the last can of Coke left on earth. (A surely nutritious meal to get up the energy necessary to fight off the cannibals.) Photo via IMDB


One of the biggest fears the ragged, dirty and hungry duo have is being eaten by packs of well-armed, low-life cannibals who eat human flesh because, apparently, all other sources of food are gone.

The Father & Son in "The Road" hiding from very hungry cannibals. Photo via IMDB

In the darkly sunny Denzel Washington film, "The Book of Eli", a similar post-Armageddon scenario unfolds with lack of food and cannibalism also running themes.

Two characters (foreground) from "The Book Of Eli" decide to abruptly leave the remote house of what appeared to be a nice old couple when they find out the old couple planned to eat them. Photo via IMDB

Apparently, the dystopian world of the future doesn't include being able to feed yourself, even meagerly. When the inevitable dystopian breakdown of central services occurs, we are left hungry, unable to fend for ourselves. (Just like most of us had to do, not so long ago.)

Luckily, just as I was getting severely depressed about the state of our future dystopia, I watched a marathon session of the delicious series, "The Walking Dead", on cable's AMC. 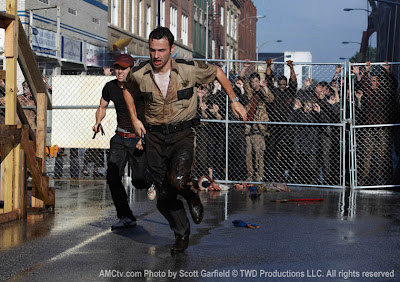 In "The Walking Dead" nightmare future, also involving yet another version of flesh eating ghouls and lack of food, a small group of feisty, still civilized survivors manage to fish and feed themselves off the land without resorting to cannibalism. Albeit, their food growing skills are minimal and leave a lot to be desired, especially since they need to spend so much time making sure they are not eaten by the virus-infected, living-dead cannibals. 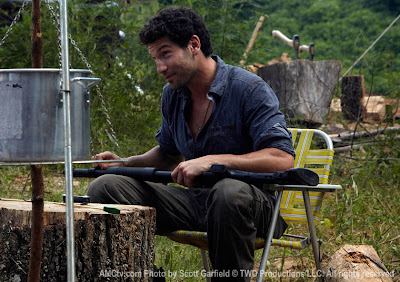 Another hunky cop in "The Walking Dead" cooking up some non human flesh meal.

SO, here are some things we ALL need to do to prepare ourselves for whatever the future might include, or not include, such as takeout food or the inevitable flesh eating ghouls that are sure to pop up one way or another:

*Watch "The Road", "The Book of Eli" and "The Walking Dead" to get yourself motivated to have a happy, greener, non-human-flesh-eating future.

*Proclaim 2011 as the "Year of Growing Your Own" and make a vow to discover ways to grow some kind of food, somewhere, whether it be on the barbed wire enclosed roof or in other protected areas free from ghouls.
(Perhaps a local, preferably well-armed, CSA farm would do.)

*Start a seed library to save and store securely as many kind of seeds as possible so you will not be limited in your choice of chow after civilization collapses and all the Zagat guides are burned for fuel.)

*Get some renewable energy of some kind to power your house and grow lights.
(I am not sure of the best kind of renewable power to use if there is some kind of nuclear or volcano induced winter, but I will get back you on that issue asap.)

Happy New Year Everyone! Looking forward to a great 2011!

PS: No, I am NOT a communist, but everyone should check out Roger Doiron from Kitchen Gardeners International as he talks about the urban food revolution born out of dire necessity in Havana, Cuba. I saw Roger accept an award at the Daily Green's Heart of Green Awards ceremony a few years back and he is someone to keep an eye on.