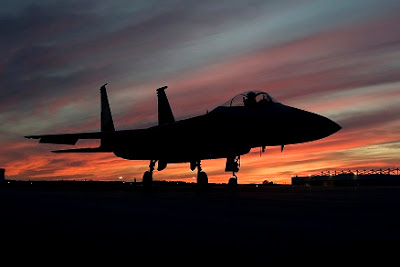 When thinking of protecting the environment and fighting climate change, one hardly thinks about the U.S. Military. But in fact, according to a new study by Pike Research, "Increased access to clean and reliable energy has become a leading priority for the U.S. Department of Defense and military agencies around the world."

In a ground breaking speech at a 2010 Energy Security Forum in Washington, D.C., Admiral Mike Mullen, chairman of the Joint Chiefs of Staff spoke like a leading environmental activist: "We are in fact seeing evidence of climate change’s potential impacts on our security." Mullen's inspiring speech sounded more in line with the NRDC than Exxon/Mobile, as Mullen stressed "how important it will be to take a holistic view of energy security and, more broadly, our overall sustainability." He emphasized how vital it is we all focus on these issues: "Americans around the country are starting to connect the dots between energy, security and our future."

It's refreshing to think there's a whole new way to look at green army fatigues, now that the U.S. military has declared war on use of fossil fuels.

Ray Mabus, the Secretary of the U.S. Navy, and a former ambassador to Saudi Arabia, proclaimed he wants 50 percent of the power for the Navy and Marines to come from renewable energy sources by 2020. Just a few renewable products our forces are developing: hybrid ships and extended range hybrid jeeps, uniforms incorporating thin film solar textiles which charge devices, tents with thin film PV woven into them, rollable solar panels, portable wind turbines and hydrogen fuel cells. There's even plans to take exhaust from vehicles in Iraq to make drinking water for troops, and efforts to cut back on water needs by recycling shower water.

Secretary of the Navy Ray Mabus said about the military's push toward environmental and energy security in the new York Times: "There are a lot of profound reasons for doing this, but for us at the core it’s practical”

The fact that U.S. forces in oil rich Iraq are becoming paragons of sustainability and lessening dependence on natural resources like oil and water, should make the rest of us stand at attention and listen. Average citizens should hear the green bugle call and take note that military forces are going green, so fast, with such a sense of urgency, and start thinking about how we can do the same. As Admiral Mike Mullen, chairman of the Joint Chiefs of Staff said: "while leadership at the top certainly matters, this can’t be just a top-down effort. True innovation doesn’t work that way. "

Importantly, Chief of Staff Admiral Mullen emphasized that green military initiatives are not just about fighting battles in some inhospitable, far off bases, in dangerous territory. Mullen stressed: "We can also make improvements closer to home. For instance, each of the services is bringing several bases up to a net-zero energy standard within the next few years." Like a conservationist, he said: "These efforts will not just achieve savings in the long run but will ensure the environment around our bases is cleaner and healthier for our people and their surrounding communities. At Twentynine Palms, California, for example, a new micro-grid controller will make the Marine Corps’ largest base an even better neighbor by reducing its energy consumption, diminishing its carbon footprint and better enabling it to be independent of California’s power grid when needed."

With renewable technology prices coming down and the cost of other fuels going up, getting a little green security has never made more sense or been so affordable. And our military's support of the environment and renewable energy technology will be a help to us all. According to Pike Research: "Military investment in renewable energy and related technologies, in many cases, holds the potential to bridge the “valley of death” that lies between research & development and full commercialization of these technologies. As such, the myriad of DOD initiatives focused on fostering clean tech is anticipated to have a substantial impact on the development and growth of the industry as a whole. "

Having a sustainable military certainly gives the whole idea of winning the battle for clean energy and fighting climate change a whole new meaning. I think it's time we all get drafted into the growing army of green and be part of this fight to protect ourselves by protecting our planet. As Admiral Mullen said in his rousing speech: "Every American must play a part – changing how we live, how we work and perhaps most importantly, how we think about these challenges. "

Copyright Paul E. McGinniss 2011
Posted by Paul McGinniss at 7:07 AM