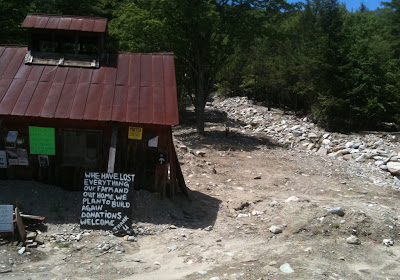 Mr. Resiliency, aka Alex Wilson, is a man on a mission.   He believes strongly in the existence of climate change and the serious effects it will have worldwide in the coming years. Alex Wilson knows a lot about the environment.  Founder of Environmental Building News, BuildingGreen and GreenSpec, Alex has been promoting environmentally friendly, healthy, clean energy living since Jimmy Carter put Solar Panels on the White House. 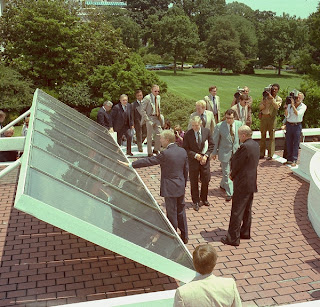 The case of the missing White House solar panels. Solar panels in the 70s went out of fashion faster then bell bottom pants and bad hairdos.  Photo of President Carter on the White House roof via Mother Board and Brian Merchant.

But, let's face it, most people did not take President Carter's efforts seriously.  Currently, as well, not enough people are tuning into the environmental cause or doing anything substantial about changing the paradigm.  While the arctic ice caps melt, whole swaths of the U.S. burst into flames or experience seriously dangerous long term drought, and freak storms regularly devastate various parts of the USA, most of us just bumble along and debate Climate Change. Blah blah blah.

In the Resilient Design Institute blog post "Changing the Climate Change Conversation",  Vern Grubinger points out the following. "The Yale Project on Climate Change Communication reports that only 40% of Americans were alarmed or concerned about climate change, 25% were dismissive or doubtful,  and the rest were in the middle. One-third of all Americans are cautious, meaning they believe global warming is a problem, but not an urgent one, and they’re unsure if it’s caused by humans."

Photo of floods in Bangladesh via Common Dreams.
Meanwhile, a shocking new analysis by the humanitarian and development research organization, DARA, warns that if the danger of climate change continues to be ignored by the world's governments, the encroaching disaster could claim the lives of 100 million people in the next two decades.  And, lost economic prosperity to the world economies would be measured in the trillions of dollars. 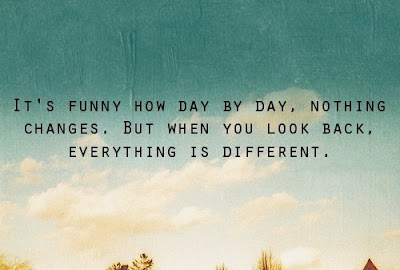 Luckily, smart people like Alex are shifting the focus away from the climate change debate and to the significant environmental impacts and disasters already slapping many of us in the face.

For instance, far from the mainstream media's contentious discussion, Himalayans in remote villages of Nepal and India, eking a living from the land, have clearly figured out that something is up with the environment. The Royal Society in London published a study in 2011 that reported the following. For Himalayans: "There is a widespread feeling that weather is getting warmer, the water sources are drying up, the onset of summer and monsoon has advanced during last 10 years and there is less snow on mountains than before. Local perceptions of the impact of climate change on biodiversity included early budburst and flowering, new agricultural pests and weeds and appearance of mosquitoes."

You still don't think getting slapped upside the head by Mother Nature doesn't change perception of global warming?  Nature.com has a revealing article entitled "Perceptions of climate change and willingness to save energy related to flood experience."

Here comes the flood.  Welcome to a green world.  Like it or not.

Posted by Paul McGinniss at 1:11 PM