No Farms...No Food! No Farmers...No Farms! Help The Farmer of Stone Ridge Orchard Buy the Farm

My  latest stop as part of my journey in the month-long 2013 Toyota Prius Plug-In MPG Challenge was to the Stone Ridge Orchard in the historic hamlet of Stone Ridge, Ulster County, New York. 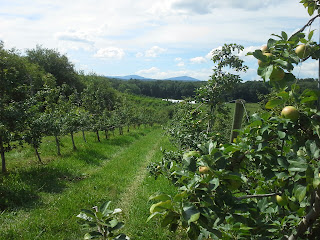 At the Stone Ridge Orchard rows and rows of fruit trees stretch as far as the eye can see, with the dramatic blue peaks of the Catskill Mountains as backdrop.  The produce grown here by farm operator Elizabeth Ryan, and at the two other Hudson Valley farms that Elizabeth Ryan helms, includes over one hundred varieties of apples, peaches, plums, cherries, strawberries, raspberries and pears including heirloom, old fashioned and traditional varieties. These farms produce endangered fruit such as French and German plums.  Also produced are Esopus or Spitzenburg apples, which originated in the Hudson Valley which some claim was George Washington's favorite apple.


Trailblazer Elizabeth Ryan, a famed Hudson Valley farmer and food artisan has owned and operated the Breezy Hill Orchard and Cider Mill across the Hudson River from Stone Ridge in Dutchess County for over 20 years.  In addition to these ventures, for the past six years, Elizabeth has been nurturing The Stone Ridge Orchard, a stunningly beautiful 117 acre parcel of land into a productive orchard.  In attempt to protect this pristine land from development she has begun in earnest a campaign to raise funds and consciousness to preserve the farm.


Over several decades of passionate advocacy, Elizabeth has garnered many accomplishments in her role as proprietor, farmer and advocate. Among the many to her credit she can claim: Elizabeth is a founding farm member of the Union Square Green Market in Manhattan, the first Green Market in NYC which helped create and launch the whole Green Market Movement. She is also a partner in the Hudson Valley's Knoll Krest Farm which raises all natural (organic and cage free) poultry and eggs.

The entrance to Stone Ridge Orchard is just a stone's throw from the "downtown" of Stone Ridge off of Route 213, and just a hop skip and a jump from nearby High Falls 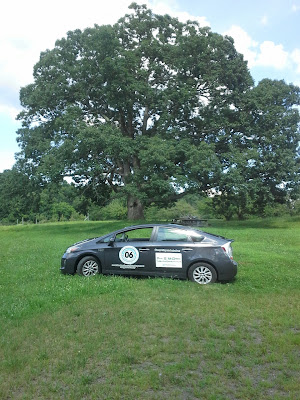 My Prius is taking a rest in front of the majestic 300 year old oak tree while I wandered around the orchard taking pictures. I was tempted to pick some apples, but alas, I refrained as there is a lovely store at the entrance to the orchard where I could buy some freshly picked fruit.

Stone Ridge Orchard is certified in the Eco Apple Program which is part of The Northeast Eco Apple Project, funded by the EPA. Eco Apple certification is managed by The Integrated Pest Management Institute of America, based in Wisconsin. The Institute reviews farms to ensure, among other things, spraying of any kind is done only when necessary and with minimal environmental impact. 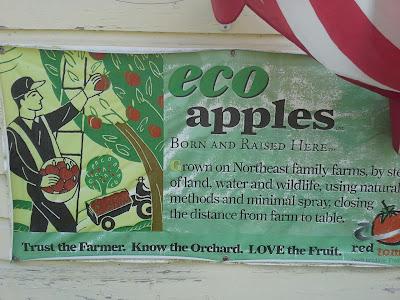 Eco Apple orchards never use Organophosphates, a toxic insecticide. The Pesticide Action Network states that "Organophosphates are similar to the chemical warfare agents produced during World War II, and are some of the most common, and most toxic insecticides used today, adversely affecting the human nervous system even at low levels of exposure."

During my visit to Stone Ridge Orchard I had the pleasure to meet Bilinda M. Phillips who works with Elizabeth Ryan.  While speaking with Belinda our conversation was interrupted by a phone call, and I overheard her on the phone speaking to a family member about her father.  It was clear from the phone conversation that he was not well.  After the call I inquired as to his well-being, only to discover that her father suffers from the devastating effects of Agent Orange poisoning.  Agent Orange was used extensively as a defoliant during the Vietnam War. 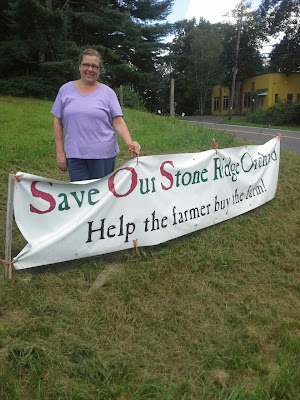 Bilinda M Phillips at Stone Ridge Orchard standing near a banner at the entrance.

While standing in front of the Eco Apple banner and the American flag, we spoke passionately about the injustice done to our soldiers who were poisoned by  Agent Orange. Neither company, Dow Chemical nor Monsanto, the manufacturers of Agent Orange, nor our own U.S. Government which contracted their services, has ever admitted legal responsibility for poisoning our soldiers no less the the citizens of the countries where Agent Orange was deployed.


This conversation about Agent Orange might seem to be a far stretch from The New York Green Advocate blog post about saving a local farm which practices sustainable and eco-friendly farming practices, but it is not.  In fact, talking with Belinda about Agent Orange demonstrated the raison d'être for advocacy in support of local farms and the dedicated agrarians who consciously and responsibly sacrifice and toil to keep the food production of our country in the hands of good stewards of our environment.

Massive amounts of herbicides and pesticides, known causes of cancer and other diseases such as Parkinson's disease, are still sprayed on the produce grown on our farms. It is with great shock and horror that I can report that in efforts to reintroduce the use of the herbicide 2,4-D as part of a "weed management program", Dow Chemical and Monsanto have formed a most unholy alliance to join forces to "poison" America's Heartland.  This herbicide is one half of the infamous Agent Orange. If successful, this is predicted to double the use of this harmful herbicide use in America's Corn Belt during the next decade.  This toxic chemical is to be sold along with the GMO crop critics have dubbed "Agent Orange Corn", which is genetically engineered to be immune to 2,4-D. 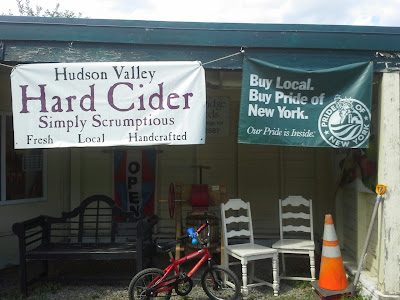 On a positive note, agricultural pioneers are not taking the situation lying down and should be supported in their efforts. In a recent media release about her exciting plans to buy the Stone Ridge Orchard, the Hudson Valley's pioneer Elizabeth Ryan reported:

We will build out an European style cidery, plant an organic cider orchard and develop an organic bee-yard with acres of bee forage. This is an ambitious multiphase project. We are looking for trailblazers, co-conspirators, friends, investors and partners. We will be hosting two major fundraisers, one in NYC and one in Stone Ridge and we are looking for qualified investors/partners for the cider company." 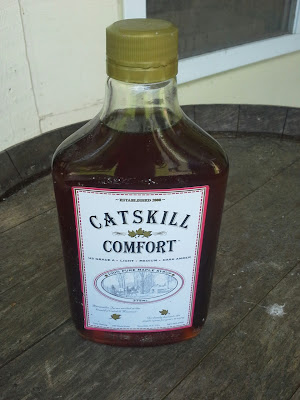 In addition to the scrumptious produce from the orchard, the Shop at the Stone Ridge Orchard temps the visitors with other special artisan locavore products such as Catskill Comfort (pictured above) a regionally produced maple syrup.  (Sorry Vermont! W e love you but you ain't the only artisinal foodies making the amber elixir) 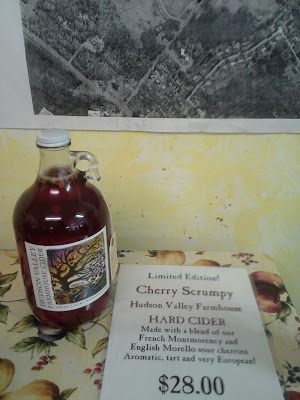 A jug of locally made at the Stone Ridge Orchard store, below a map of the property.

In a recent interview with Farm Aid, a nonprofit organization whose mission is to keep family farmers on their land, Elizabeth Ryan was asked why farmers are important.  Her eloquent response:

"Being a farmer is like being a doctor or an artist - we give back to the community. Health starts in healthy soil and healthy food. Everything starts with food and we feed people! We also maintain open space and natural habitat. Farmers preserve a non-industrial way of life, in rhythm with the land and seasons, which is important to our culture."

Elizabeth Ryan reports a detailed fundraising campaign will be announced shortly, but in the meantime, you can donate at www.friendsofstoneridgeorchard.com You can also contact Elizabeth directly at elizabethsetonryan@gmail.com for more information on how you can help.

NOTE: This post was written during my participation in The 2013 Toyota Prius Plug-in MPG Challenge.

From July 12th to Aug 12th, I will be driving a Prius Plug-In Hybrid as part of the 2013 Toyota Prius Plug-in MPG Challenge.

Toyota has partnered with seven prolific environmental influencers (myself included) from the tri-state area for Wave Two of the 2013 Prius Plug-In MPG Challenge – a fun competition to help educate local communities on the benefits of electric vehicles. The winner of the challenge will receive a $2,500 donation to the charity of their choice.

I would like to thank Earth Day NY for facilitating my participation in the Prius Plug-in MPG Challenge in NYC.Check out Earth Day NY on Facebook.

And, a big shout out to  Element, Times Square Westfor providing hotel accommodations while I am in NYC for the challenge.

Posted by Paul McGinniss at 4:23 PM