Watch Out Solar PV: Your little brother, Solar Thermal, has grown up and he might very well become more popular than you are.
by Paul McGinniss 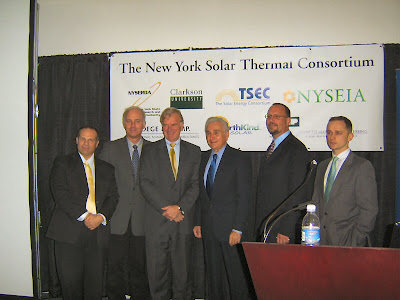 Some of the organizers of the Solar Thermal Roadmap Symposium with Congressman Maurice Hinchey, (U.S. Representative for New York's 22nd District), standing third from the right.

With the green revolution taking off like the hula hoop in the late 1950s, renewable energy systems that generate electricity such as Solar PV and the new vertical axis wind turbines (VAWT) have become like the captain of the high school football team and the head cheerleader--hot and sexy, the most popular kids on the renewable energy block.

Well, solar thermal, which has been overshadowed by its better known sustainable siblings, is having a coming out party and might very well push the other "cool green kids" out of the way and grab the title of new Green Prom King for itself. It's no surprise. In other countries solar thermal has become a standard accessory for homes, as common as a television or computer. For example, almost 100% of the homes in Cyprus have a solar thermal system.

A Solar Thermal Roadmap Symposium was held at Tech City in Kingston, New York, on October 20th. Organized by the New York Solar Thermal Consortium, it launched plans for a Solar Thermal Road Map for New York State. The consortium is comprised of a committed group of business, government and academic groups. It's part of a country-wide initiative by States which are organizing to finally put Solar Thermal at the adult table. Solar Thermal is expected to be a major part of the near-term solution to finally make our homes and buildings 100% carbon neutral and free from having to use imported oil and other fossil fuels.

WHAT IS SOLAR THERMAL?

Unlike solar PV, solar thermal systems do not generate electricity but rather capture heat from the sun for use in homes and buildings. There are several basic types of solar thermal. Solar thermal for hot water is one. In this process the sun heats a fluid running through solar collectors. This heated fluid circulates through a storage tank where it transfers its heat to the water in the tank. Utilizing an evacuated tube solar collector, solar thermal systems can also be used for radiant heating. Solar Thermal systems like this can also be used to heat pools. And, they can cool homes via absorption chiller technology. (See diagram below that depicts a solar thermal hot water system. Image is from Earthkind Solar.) 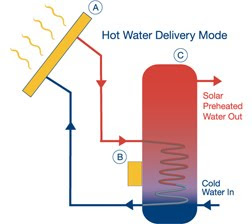 Solar Thermal Air is another basic form of solar thermal technology. In this process solar collectors heat air that is drawn into the building. The solar pre-heated air is ducted into a building via existing ventilation systems or distributed via fans and ducting.

Picture of the SolarDuctTM from Solarwall. This rooftop installation heats air and sends it into the building via ducts.

The goals of the Solar Thermal Roadmap and the New York Solar Thermal Consortium are "to catalyze the construction of 2,000 megawatts of solar thermal power and create highly skilled solar thermal jobs in the state." To realize these objectives, the pressing need is "to involve all stakeholders in developing a comprehensive list of the questions, issues, and approaches to solving the current under-utilization of solar thermal technologies in New York State."

The Solar Thermal Roadmap Symposium came about in no small part due to the efforts of Ron Kamen of EarthKind Solar who is also President of New York State Solar Energy Industry Association (NYSEIA). 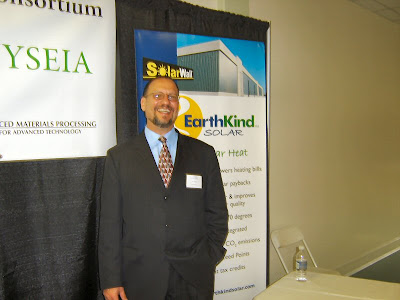 *Solar Thermal is 1/3 the price of Solar PV and the pay back period is less than 10 years.

*There is a federal tax credit for solar thermal water systems equaling 30% of the cost of the system. There is also a state tax credit equaling 25% of the system's cost. (Note: these incentives do not yet apply to solar air systems.)

*18% of all household energy consumption is for hot water.

*51% of all energy used in NYC Buildings is for heat and hot water. Outside NYC, the percentage is higher.

*In Germany, solar thermal will be mandatory in new and existing buildings by 2015.

NOTE: You can read the New York Solar Thermal Consortium Whitepaper "The Development of a Solar Thermal Market in New York State" on Sebastian Goeres' web site Renewable Energy in the U.S.


Check out the video below about Solar Thermal in Europe.

Europe is way ahead of the curve with this affordable and important technology where, in the near future, more than 50% of energy to heat homes and hot water will come from solar thermal technology.

Posted by Paul McGinniss at 3:22 PM