Twinfire: The Most Efficient Wood Stove In the World 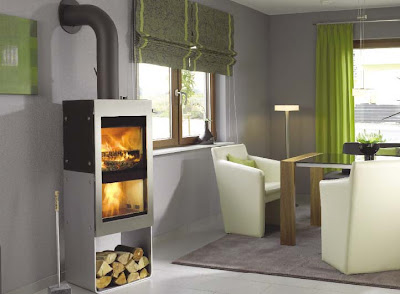 A recent walk in the country, just a few weeks after the major blizzards of late winter 2010, made it quite apparent the amount of free "biomass" available to many residents and communities in upstate New York. The amount of felled wood from the storm was astounding.

Luckily, there are New York initiatives to do something practical with all that wood. The primary objective, of course, is to use it to heat the homes it falls down next to. With help from The New York State Energy Research and Development Authority, Westchester, N.Y. based Wittus Stove is positioned to import a new high efficiency stove called Twinfire. The development of the German manufactured stove, which is being sponsored by NYSERDA, is reported by the distributing company to be the most efficient stove in the world.

Sandra Lena at Wittus told me "NYSERDA is sponsoring the unit and it is being imported and made to US standards exclusively for Wittus." While not available yet, Sandra explained when I spoke with her: "NYSERDA is actually funding the R&D on the unit. The unit has been approved and we are working on the manual & label."

Although, not marketed as a primary heat source, the Twinfire will heat a 1300 s.f. space with models ranging in price from $6,000 to $10,000. This may seem expensive, costing as much as some "regular" home heating systems. But, if you look at it in perspective, they are not a waste of money because they can be used to heat up to 1300 sf and offset a major part of the heating fuel used in the home. And, consider the added eco-benefit--that these systems can use the embodied energy in that free "biomass" that is literally falling down around us. Wittus reported: The "regular" US household burning wood as their main heat source will burn (on average) 4 full cords of wood per season. I think that any client that will purchase the Twinfire will used it primarily as a back-up heat source, and will burn 1-3 cords per season."

There are many New York State homeowners with trees on their property who would benefit greatly from these kind of high efficiency wood stoves. And, importantly, in an emergency, having a heating source like the Twinfire means you can continue to heat your house while the rest of the neighbors might be worried about when power will come back on. The Twinfire looks cool to boot. So it's a no brainer and worth the investment if you can afford the up front costs. If I was buying or building a home upstate, I'd try and include the cost in the purchase price along with the solar thermal and solar PV.

High efficiency wood stoves like the Twinfire are made a bit more affordable because there's a Federal Tax Credit for them. Their purchase and installation costs can qualify for a 30% tax credit,(up to a maximum of $1,500), that was authorized for biomass-burning home heating stoves by the Economic Recovery and Reinvestment Act of 2009.

Proper forestry maintenance, when coupled with the cleaning up of fallen trees and limbs from storm damage, could have a major impact on energy security for our state if the "biomass" was burned in super clean burning, high efficiency wood stoves like those sold by Wittus. If this reclaimed wood is harvested properly, it is virtually an endless supply of heating fuel.