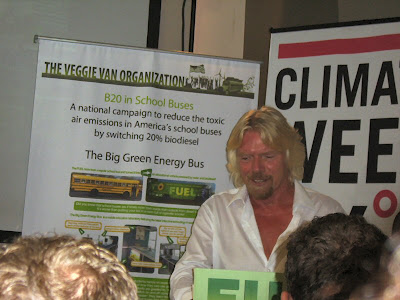 Sir Richard Branson joined Josh Tickell and Rebecca Harrell, the team behind the Veggie Van Organization and award winning Sundance documentary, "FUEL", to announce a new green curriculum for schools that meets national education standards. The curriculum will help educate the next generation about renewable energy and fuels of the future.

Developed by the non profit Veggie Van organization, the curriculum aims to "empower students to take action". It grew out of demand from "FUEL" theater goers, particularly mothers and teachers, who wanted to have a classroom version of the "FUEL" film which highlights unique green energy solutions for the future. The school program involves a dynamic, interactive, web-based curriculum hub that will enable a country-wide dialogue between teachers and students about green fuels of the future. 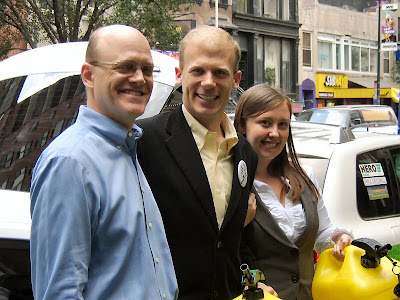 Jonathan Schein, founder of Schein Media and publisher New York House magazine, with Josh Tickell and Rebecca Harrell in front of the Algaeus, an algae fueled car, with containers of Algae fuel

Josh Tickell and Rebecca Harrell were in New York as part of a cross-country tour in a green vehicle caravan that includes the "FUEL" movie bus and the Algaeus, a Prius hybrid that runs partially on algae bio fuel.

Curiously, as I was on a bus leaving NYC, I read an article in the New York Times entitled "Oil Everywhere: It's a boom year for new finds". The article seemed to defy the entire raison d'etre of the "FUEL" film and the Veggie Van organization, that is, to make the world see that it is time to move beyond the pollution and climate change problems due to the continuing use of oil and non-renewable, carbon based fuels and embrace a green renewable future. The New York Times article said: "The oil industry has been on a hot streak this year, thanks to a series of major discoveries that have rekindled a sense of excitement across the petroleum sector, despite falling prices and a tough economy."

All I could think was: Should we be excited about this? 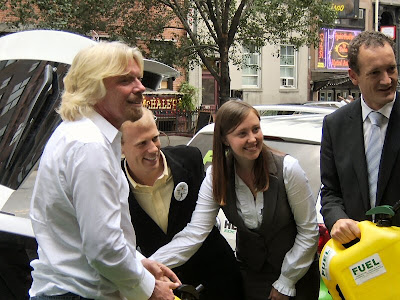 Sir Richard Branson about to pour Algae Fuel into the Algaeus, with Josh Tickell and Rebecca Harrell and Steve Howard, CEO of the Climate Group

This dichotomy of reality made me recall Charles Dickens' opening lines of his classic novel, "Tale of Two Cities"-- "It was the best of times, it was the worst of times". Is New York City today such a tale of two cities? Is it the best clean energy city or the worst city? Will the oil keep flowing and the coal keep burning? Do New Yorkers really understand the importance of the green energy revolution and how shifting to renewable energy now is extremely important for both economic and environmental survival?

Is it same as it ever was? Has anything really changed? Has our society crossed the threshold of outdated thinking and technology? Are we ready to unify and give up the wasteful and environmentally damaging energy policies of the past? Or, are we still unsure and questioning the validity of what the "FUEL" film and the Veggie Van organization is all about? 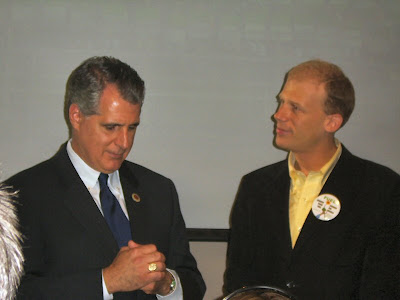 I said goodbye to Josh and Rebecca on 14th street in Manhattan after the excitement of the green curriculum announcement with billionaire, visionary, green energy advocate Sir Richard Branson. Branson, featured prominently in "FUEL", is investing in renewable energy ventures and has already tested jet fuel made from algae for his Virgin Airlines. It was exciting to meet him and be part of the event. But, after he left, the palpable energy slowly dissipated and in the end it was, once again, just Josh and Rebecca and their crew ready to load up their caravan and drive onward. They and a dozen additional dedicated souls were headed to Philadelphia with their green vehicle caravan to open "FUEL" in that city later that night. And, there were more cities on the horizon after that. Same as it ever was, or not? 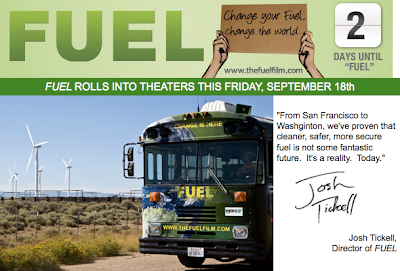 It's been a long road for the couple who have been working for years on this journey to free America from oil addiction. With the New York Times touting a boom in new oil discoveries, in many ways, their work has just begun. Optimistically, with a new green curriculum for schools headed our way, despite resistance from oil industry forces, and any momentary doubts, it is no longer the same as it ever was.

You've inspired us by your getting off the couch of indifference and standing up for something. You've demonstrated that a few grass roots visionaries with commitment and sincerity can make change. You've turned a dirty old yellow school bus into a clean bio fueled big green energy classroom. You've inspired me to help you bring your green caravan and film and school program to Southampton and New Paltz and the New York communities I am part of because what you have done is open up possibilities for future generations.

I hope the green curriculum that Josh and Rebecca want to give away for free to all schools in America does become required reading and teaching. As we teach our children about the historic battles in our country fought for Independence,Civil Rights and freedom from world tyranny during the second world war, why not educate them as well about the Green Revolution that is happening right now in real time? Why not work to involve everyone in America in the process of learning how to live sustainably and preserving the beauty and wonder of our planet. Of course, the future is the children of the world and their active participation is of paramount importance to realizing the end goals that will make the world a better place to live and be. The green curriculum is of vital importance to be implemented without delay.

With the rise in green building requirements and energy efficiency in building, what's the point in building green school buildings if the curriculum itself does not inform the students about inspiring developments like algae gasoline and high altitude wind turbines, as well all green focused industries creating jobs that will make the world a better place for all those students about to graduate?

Josh Tickell and Rebecca Harrell and their green vehicle caravan are on a trip that is, as the Talking Heads said in the title to their song, "Once in a Life Time."

Check out the Talking Heads video below. And contact the Veggie Van Organization about how you can be part of this trip of a life time and how their green curriculum program can be brought to a school near you.

NOTE: Last week, when the Green Curriculum initiative was announced, was Climate Week NY°C which coincided with the NYC United Nations Summit on Climate Change .