Cool Picks: Mind Expanding Finds on the Web About the Future Metropolis 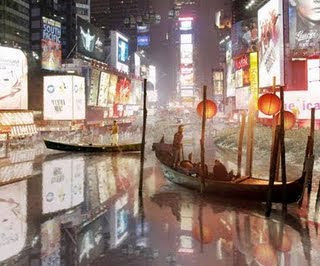 When I saw the Blade Runner meets Jetson Green meets Monet water lily image of a futuristic Times Square, NYC depicted above on Alex Aylett's Blog openalex, I thought - wow - we share the same taste. Not that Alex or myself particularly want to live in a flooded metropolis. But, how cool are these dreamy, wonderful, devilishly playful images from NYC architect Studio Lindfors? 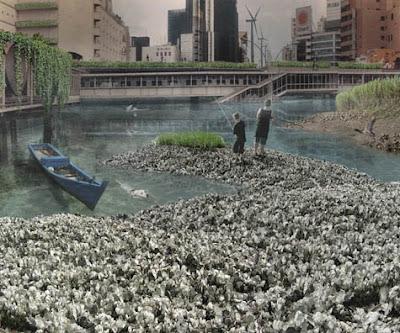 Despite the nod to problematic sea levels rising, the images made me feel hopeful, if only because I found out I am not the only one particularly fascinated (obsessed) with futuristic floods and other things now thought abnormal, yet potentially soon to be normal, headed our way, like a Segway, which at first seemed oddly futuristic, but now seems, somehow, oddly quaint. 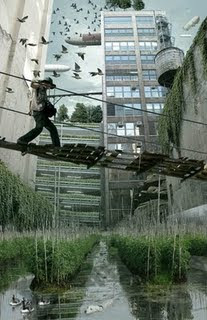 Alex says his blog is "for news and views on the future of sustainable cites." You can also find his writings on urban redesign and sustainability in ReNew Canada worldchanging.

Here's a link to Studio Lindfors.

If you want to see some of my musings about floods and the architecture of the future, see this blog's summer 2009 post: Water World Here We Come

The openalex blog also had a totally cool post about a guy named DJ/Rupture in New York who does a sort of eerie trance music for people who might have a tendency to be high on E (the Environment). Check it out: