When I saw the awe-inspiring picture (below) of an elegant Christmas tree made out of old beer bottles on the Inhabitat web site, I thought immediately: That's a pic for a holiday web post.

The Inhabitat post linked back and led me to Recyclart.org which not only discovered the Christmas tree in China, but is a discovery of what clever people around the world dream up to do with "junk". Recyclart.org is done by a French company called Neomansland.com and depicts an amazing assortment of practical products made out of what would most likely become garbage. To list just a few of the objects: rubber boots made into flowerpots, an oil drum made into a comfortable seat and track lights made from Illy coffee tins. And, just because the products are made from "crap", it doesn't mean they look like it. Some of the goods made from refuse were astonishingly beautiful and beyond the kitsch so often a result of this kind of DIY experimenting. 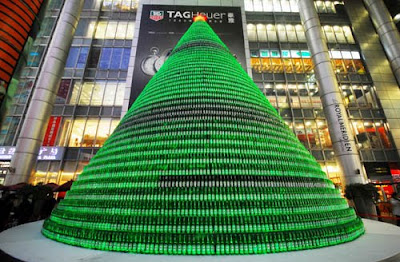 Christmas tree in Shanghai made with 1000 Heineken beer bottles.

Recyclart states: "The goal of Recyclart.org is to bring you good products that are made from re-cycling, re-using, up-cycling,etc. We will not bother you with a lot of text or details, we prefer to give you inspiration through pictures and the link where you can find more information. The goal is to be a kind of portfolio based on ideas in which you can brainstorm your creativity." 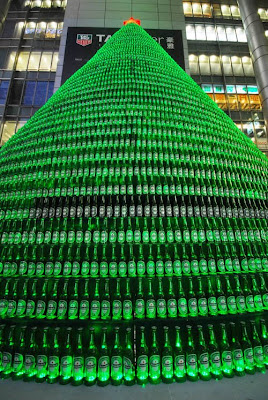 Close up Christmas tree in Shanghai made with 1000 Heineken beer bottles.

Brainstorming your creativity hits the nail on the head and is the essence of what is happening on the green front these days.

Be sure to go to the architecture section of Recyclart where you will see an assortment of buildings, small and large, made from discarded objects and materials. The real structures highlighted include: a home made out of an old plane, a railway car church and a building made out of old kitchen sinks. Looking at these homes made me realize how important it is to think out of the box AND how many new concepts, materials and technology will be coming to the green building movement in the next years.

Some of the building structures discovered on Recyclart were in the spirit of renegade, visionary, Earthship architect Michael Reynolds who builds homes made out of used cans and bottles. For example, a magnificent Buddhist temple in Thailand was made out of old beer bottles. I'm not sure if a temple made out of "dead soldiers" makes me want to go out and get a six pack or do some yoga. Probably both, albeit, perhaps it is best to not drink beer and do yoga at the same time. 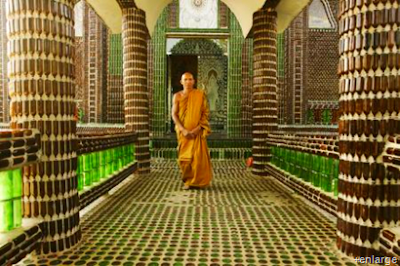 Monks from the Sisaket province in Thailand used over one million recycled glass bottles to construct their Buddhist temple.

Click on the video below about visionary "bad boy" Michael Reynolds who takes dirt and recycled materials and transforms them into living structures. They don't call him the "Garbage Warrior" for nothing.

Happy Holidays. 2009 has been a really fantastic year. The world is bursting at the seams with inspiring creativity. Let's keep the world brainstorming going. See you next year.

Posted by Paul McGinniss at 9:47 AM