A London Art Show About the Environment Begs the Question: Does Art Really Mean Anything When Saving the World at COP15 Seems to Be All That Matters?

Reading Critiques of COP15, The UN Climate Change Conference in Copenhagen , and looking at the "EARTH: Art of a Changing World" Exhibit in London Makes Me Think International Climate Conferences and Contemporary Art Shows Might Just Have Something In Common 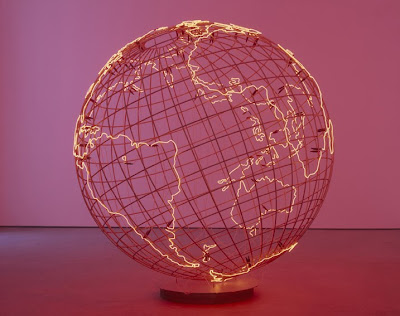 With Climate Change and the Copenhagen UN Climate Change Conference dominating so much of the news lately, I wonder if recent International art shows really matter. There is a real climate revolution going on right now and the ivory tower nature of the art world by and large seems a kind of cop out. Despite clinging to notions of world impacting significance and being a place of serious money, the rarefied world of international art is hardly a place that can take credit for effecting serious change.

For example, the trendy parties, nee celebration of the art dollar, at the recent Art Basel Miami schmooze fest seem incongruent with the implied message coming out of "EARTH: Art of a Changing World" exhibit at London's Royal Academy of Art i.e. that EARTH and ART share some symbiotic relationship in a Climate Changing World. Art Basel Miami, like much of the art world, seems farcical, if compared to the serious issues being addressed at COP15. This seems especially so when considering that in 50 years much of Florida could be flooded from rising sea levels. I hope the jet set collectors with Miami addresses are building vanity museums that float so their valuable holdings can be moved when the time comes. This would be a perfect way for the art to get to the Venice Biennale as Venice is already under water a good bit of the time. In 2050, I envision Art Basel Miami performance art videos projected through the LED sided hulls of art museum ships that float through Miami on the way to Venice. A new version of Peter Gabriel's "Here Comes The Flood" will be in order.

But, just as I was thinking art world fakery and real world issues don't have a thing in common, The Contrivance in Copenhagen by Breakthrough Institute's Michael Shellenberger and Ted Nordhaus appears in my Inbox. This thought-provoking commentary by the founders of Breakthrough Institute and authors of the controversial polemic "The Death Of Environmentalism" said about COP15: "From the opening ceremony's video of a little girl running from a global warming earthquake to the promises of emissions reductions, everything taking place in Copenhagen is contrived."

The authors expounded, Jacques Derrida-like (ahem--French literary theorist and philosopher), about the UN Climate Change conference in Copenhagen: "Everyone Pretends It's Real" and that "Copenhagen is pure simulacrum"

Simulacrum? I could have sworn they were talking about the art world.

Stills From four-minute film called "Please Help the World," produced for the Ministry of Foreign Affairs of Denmark to show at the opening ceremonies of COP15. It's like the art world and environmental world were "separated at birth" and now almost seem like surreal conceptual twins.

Indeed, the COP15 film looks like something one could "consider" at the New Museum of Contemporary Art or "discover" conceptualized at a high end gallery in Chelsea, New York. Shellenberger and Nordhaus conclude that the Copenhagen Climate Change summit's "final result is a conference that is desperately fake from beginning to end." Hello Whitney Biennial. The Contrivance in Copenhagen essay elaborates: "There is no better symbol of the phoniness, the manic self-referentiality, and the desperation of global warming politics today than the one created and projected by United Nations diplomats upon the screen: a scared little girl with a video camera." Phoniness and manic self referentiality? I am transported to MOMA's PS1 cutting edge Queens outpost again.

The essence of "Contrivance in Copenhagen" is that environmental efforts have been ineffective across the board. The authors argue that politicians aren't creating significant change and that the masses aren't even really concerned or demanding it. The essay's message is clear. The impact of environmental activism on Climate change is producing negative results. "Greens have not only failed to achieve action, they have made the situation worse, alienating the public even more than they had alienated them before..." 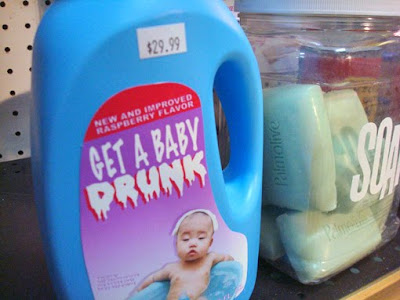 Picture From "Okay Mountain Corner Store" which was a fake store created in Miami for the Pulse Art Fair during Art Basel Miami. The store sold made up products and was created by an art collective in Austin Texas called Okay Mountain. Photo Courtesy Okay Mountain collective. .

When it comes to alienation, the singular worlds of environmental politics and art have something in common. Both, in the end, are distanced from the masses. Since green activists and artists seem to know how to alienate the public so successfully, maybe it's time for them to join forces. It might be a way for these two groups, both out of touch with the populations they say they serve, to accomplish more than they have managed to achieve separately.

What would Andy Warhol do if he were alive today? Would he substitute Liz Taylor for a Polar Bear? Would Andy Warhol even care unless he could sell limited edition RECS - silk screened Renewable Energy Certificates at a new Sotheby's Climate Art Division? On the other hand, Politicians in these "end of days days" should take a break from pretending they are not pretending as they pander to special interest groups. Perhaps, like artists, they should embrace the emperor that has no clothes. Politicians from Denmark to Detroit should use more art, even if it is just the art of diplomacy and politics, to make change. 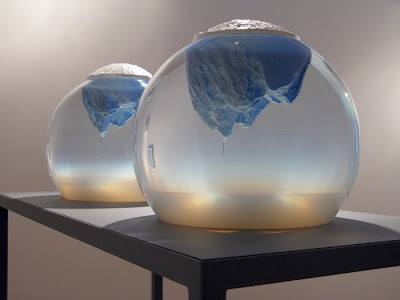 Not to end on a negative note, let me say that I think the exhibit "Earth: Art of a Changing World" is proactive despite the lack of hammer and sickle hitting us over the head--Lenin style. Perhaps, I am too negative about the art world's purpose and potential societal impact. (I am sure I would have had a blast at Art Basel Miami) Inhabitat had a great post about some cool art exhbits going on in and around COP15 and it made me want to revisit some old art world haunts.

At the same time, I might need to stop being so positive about the green movement and talk more objectively about its flaws and drawbacks. Lately, I've felt too much like a teenage eco cheerleader with no one in the audience except other green rah-rah-ites who look and sound just like me. We can't forget that saving the world is not the immediate concern for most people. Little things such as paying the rent or the next doctor's appointment take precedence in most lives. And, maybe, essays like "The Contrivance of Copenhagen" are too negative and somewhat of a cop out in and of itself. The events in Copenhagen might have been, to a large extent, pre-negotiated and pre-ordained, but I have a hard time embracing the authors' strict analysis that the entire event was just pretend. At least the political world is engaged in, hopefully, constructive talk about the environment and using conferences like COP15 as a stepping off point to advance towards the next level of necessary, universal change.

Maybe next year's UN Climate Change conference should merge with an international art fest somewhere. If Venice and Miami are going to flood, we should talk about Climate hand in hand with the Culture we purport to want to save and vice versa. An art world climate conference can be a kind of better dressed "Burning Man." But, instead of escaping to the desert a la "Burning Man" to create a temporary fantasy world, artists and politicians alike can convene around the naked emperor called Truth in a large trade center in some pleasant city somewhere. There they can try to figure out how to design a green world execrcise plan so our king of kings can put on a running suit, like the rest of us, and go out and kick the world's ass into better shape than its ever been in before.

Watch the short video below for an entertaining explanation of the Burning Man festival in the Nevada desert. Music is by Nouvelle Vague. Video by pseudonymproductions.