There's A Lot of Talk About Too Much CO2 in the Atmosphere, But It May Be The Oceans We Really Need to Worry About

David Bowie sang in his famous 1969 song, "Space Oddity", "For Here, Am I sitting in a tin can, far above the world, Planet Earth is blue and there's nothing I can do." I think Oceanographer, Explorer, Adventurer, Environmentalist, Author Sylvia Earle would disagree with the idea that there is nothing one can do when it comes to proactively dealing with Planet Earth. Sixteen years prior to man landing on the Moon and Major Tom's misadventure, Sylvia donned a wet suit and decided to jump feet first into the vast unexplored ocean and go where no man or woman had ever gone before. To her, the earth itself was as unexplored as outer space. A one woman NASA for the sea, she helped launch the whole idea of modern oceanography. For over five decades her actions say loud and clear: "The planet earth is blue and I am going to make sure it stays that way!" We all need to join her in that quest.

Earle's new book, "The World is Blue: How Our Fate and the Ocean’s Are One", is being called the "Silent Spring" of Our Era. In the book, she articulates, through personal experiences and scientific documentation, how the decline of the oceans is happening parallel-to-and-delicately-intertwined-with the fate of the atmosphere and what is happening on land. 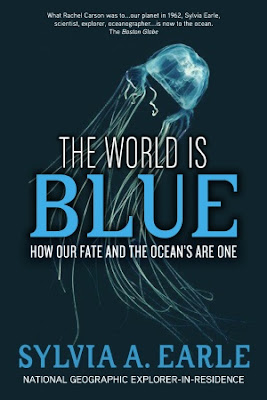 I had the opportunity to speak with Sylvia prior to her planned travel to New York to be the honored guest at OUR OCEANS, the December 8th, 2009 Green Drinks NYC Holiday event.

Sylvia is also scheduled to speak the prior
Monday, Dec 7th, at the Explorers Club's second annual Oceans Forum in Manhattan. (Look for my future web posts about both of these events.)

Sylvia Earle did seem larger than life to me while preparing to speak with her for the first time. I imagined an Indiana Jones-esque type character, fearless and mythical--almost too amazing and colorful a story to believe is more than a fantastic Hollywood invention. (Are you listening Jodie Foster?) I mean, it's near impossible to not be at least a tad bedazzled by Sylvia Earle. Among other accomplishments, she is a National Geographic Explorer in residence, a woman who led a five year sea voyage and participated in almost 75 other expeditions, logged more than 6500 hours underwater, lectured in 70 countries and authored more than 170 publications. She won a TED Prize, has been scuba diving for over half a century, walked the ocean floor some 1,250 ft. below the surface, and utilized 30 different types of submarines. She was named “Her Deepness” by the New Yorker and the New York Times, a “Living Legend” by the Library of Congress, and Time Magazine’s first “Hero for the Planet.” 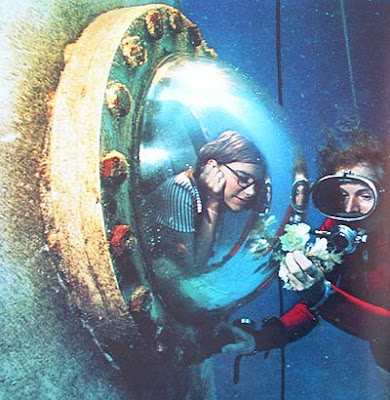 1970 Picture of Sylvia Earle (in wet suit). From the book "Exploring the Deep Frontier" by Sylvia Earle & Al Giddings


Sylvia Earle's life story is one of adventure and determination, - the Amelia Earhart of the Seas. Except, luckily, this explorer has not gotten lost. In fact, her recent, increased visibility is making a major difference in how the general public and world leaders view the oceans. For just one example of her influence: Sylvia Earle is a key reason why Google Earth developed Google Oceans - a phenomenal learning tool that is going to help protect and maintain the ocean's health.

Sylvia reflected on how Google Oceans came about: "It really began as a chance encounter at a meeting in Spain with John Hanke who helped start something called Keyhole which was a predecessor to Google Earth. He is now leader of Google Earth...I did not know John really well but...I looked him straight in the eye and said - I love Google Earth but I hope one day you'll finish it!" Sylvia went on to explain how she encouraged Hanke to jump into the ocean with her: "All of the ocean out there is just a big blob of blue. You should call Google Earth, Google Dirt. You've done such a good job with the land, but the ocean is missing." Sylvia, with obvious admiration for Hanke and Google, noted, with great relief, that "John Hanke could have been offended and never spoken with me again, but instead he sought me out afterward and he said: you know, you're right. We need to do something." 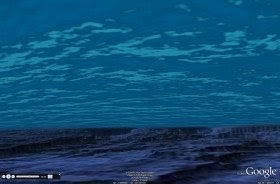 In February 2009, Sylvia Earle was on hand with the likes of Jimmy Buffet for the launch of Google Earth 5.0 which includes new sections on the ocean that are narrated by Earle.

There's definitely an activist streak to Sylvia Earle. I suppose, if you are willing to battle the vast, tempestuous sea for fifty years, we shouldn't be surprised that she is not afraid to jump into the turbulent, sometimes-unforgiving, political waters of Washington DC to promote her cause. She was, after all, former Chief Scientist of the National Oceanic and Atmospheric Administration (NOAA) under President George W. Bush. She currently has her sails set on attracting more Federal funding and backing for increased sea conservation and research. Many people do not realize it, but the unprecedented Marine Sanctuary that President Bush established in the Pacific Ocean was due in large part to a personal encounter that Sylvia Earle had with our Forty Third President. After the 2006 screening of a Jean- Michel Cousteau film at the White House, Sylvia sat at the President's dinner table with the Chief Executive and a half dozen other people. Soon thereafter, in mid-2006, President Bush decreed 140,000 square miles of ocean in Northwest Hawaii as a marine sanctuary. At the end of his second term in 2008, President Bush designated almost 200,000 additional square miles of the Pacific Ocean as a national monument. This historic marine conservation is the largest protected area of ocean ever established.

Over a 90 minute dinner, Syliva helped President George W. Bush see the necessity to take decisive action to protect the oceans. I hope Sylvia Earle and her colleagues have the opportunity to have dinner soon with President Obama to lay out an International health plan for our oceans. (President Obama are you listening?) 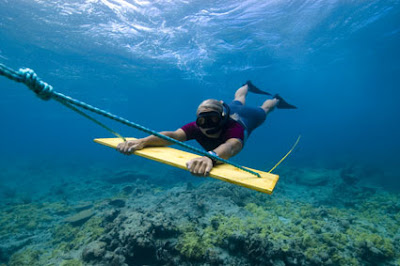 A NOAA archaeologist uses a towboard to search for shipwrecks in the Papahanaumokuakea Marine National Monument.

From Washington DC to around the world, Earle is calling for the world's political and business leaders to unite and protect these oceans which connect us all together. Compared to the magnitude of the ocean, the amount of sea that is protected is infinitesimally small. To advance this conservation effort, Sylvia started a foundation, Deep Search, in 2008. Today, it now works with international organizations in over 100 different countries to advance technology of the sea and identify and protect critical areas in the ocean. Sylvia said: "These groups work with the governments and we have to work with them to bring into place the policies needed. We also need to get people everywhere to be aware of issues and insist that their governments take action, while there is still time."

Towards the end of my conversation with Sylvia, I brought up the enormous amount of money being directed towards renewable energy. For example, the U.S. Department Of Energy has seen its budget double in the past few years to over $50 billion. Though we have seen a recent increase in funding and attention being paid to the health of the air and land, Sylvia believes the efforts in research and protection of the seas are too modest especially given the fact that we are talking about the world's largest producer of Oxygen and absorber of more CO2 than all of the world's forests combined. Sylvia, regarding efforts to combat climate change and global warming on land and in the air, said: "It needs to be paralleled with the urgent need to protect the engine, the blue that holds the planet steady."

Before I knew it, Sylvia and I had been talking with ease for sixty minutes. Knowing how busy she is, I knew I needed to let her go. She would be flying to New York City in a few days and I was looking forward to seeing her at the Explorers Club and the Green Drinks NYC event. Given the demands on her time, I asked Sylvia: "Do you ever get green fatigue?" She paused ever so briefly and replied: "I've lived long enough to see many people and places that I love disappear. That, and I value life fiercely. So, it's a gift just to wake up and know that I'm alive. That I have another day to do something. So - green fatigue - is a thought I have not imagined."

I rarely watch long videos on the web. Yet, I watched the entire 20 minute talk given by Sylvia Earle at the TED Conference in 2009. It's one of those captivating moments where you realize you have the rare privilege of listening to someone of incredible, historical consequence. Check it out below.

Posted by Paul McGinniss at 7:24 AM