Meira Blaustein, Co-Founder and Executive Director of the Woodstock Film Festival, Strikes a Pose with My Prius Plug-In Hybrid 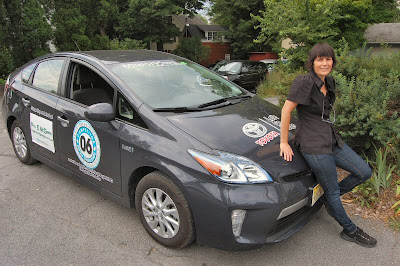 I love the tranquil beauty and stunning scenery of the Hudson Valley of New York, Ulster County, in particular where I happen to reside.  And, one of the things I love the most about this spectacularly inspiring area is the wonderful Woodstock Film Festival which takes place in and around the eclectic (and electric), historic little Village of Woodstock every fall.  (They don't call Woodstock the "Colony of the Arts" for nothing as it has been attracting creative artists and performers since the late 19th Century.)

I have been lucky to regularly attend the Woodstock Film Festival as a writer/journalist in the past years, allowing me to see important films before they are released to the public.  Last year, for instance, I saw the stunning film "Chasing Ice" and I was so blown away by this film about our melting ice caps that I wrote this article about it for EcoWatch: Chasing Ice: Ground Zero of Climate Change. 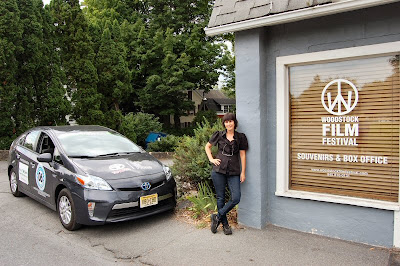 Meira Blausten, Co-Founder and Executive Director of the Woodstock Film Festival outside the festival's headquarters in Woodstock.


At the 2011Woodstock Film Festival I saw the thought-provoking film, "Cape Spin", and wrote a well-received post on this blog after interviewing the filmmakers at the Colony Cafe in Woodstock. The Colony has been a vital presence in Woodstock since 1929 and serves as a hip hub for the festival participants when they are in town. 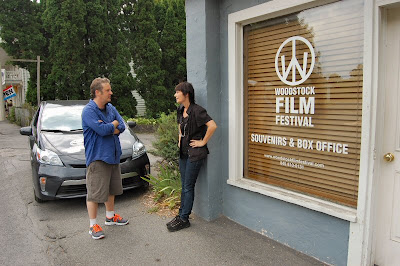 Meira Blaustein and I talking about the upcoming 2013 Woodstock Film Festival which
will take place in October.

Coincidentally, Toyota is also a sponsor of the Woodstock Film Festival. Meira told me when I spoke to her: "As Toyota's Prius was a sponsor of the 2012 Woodstock Film Festival, it was the vehicle of choice during the run of the festival for some of our VIPs and staff, myself included. We all love the Prius and look forward to a continued relationship with it this year and in the years to come. "

For the past 14 years, HVFC has positioned the Hudson Valley as a prominent venue for film, television and associated hi-tech activity within New York State by attracting working producers, directors, industry personnel and new businesses that in turn use the local communities for production purposes.


From July 12th to Aug 12th, I will be driving a Prius Plug-In Hybrid as part of the 2013 Toyota Prius Plug-in MPG Challenge.  Toyota has partnered with seven prolific environmental influencers (myself included) from the tri-state area for Wave Two of the 2013 Prius Plug-In MPG Challenge – a fun competition to help educate local communities on the benefits of electric vehicles. The winner of the challenge will receive a $2,500 donation to the charity of their choice.