The eGallon: How Much Cheaper Is It To Drive On Electricity?

eGallon from US Department of Energy

Philip Proefrock at EcoGeek tipped me off today that The United States Department of Energy (USDOE) has introduced a new web tool to help consumers compare the cost to drive an electric vehicle (or hybrid in electric mode) versus a conventional gasoline vehicle.

This is great news. Because, for most of us, purchasing an EV is not just about saving the environment by having cleaner transportation options, but also about saving money on the cost of transportation.  And, it was not that easy to compare the cost of electricity to charge EVs to the fuel costs at the pump and understand which was the better deal.

According to the USDOE egallon methodology, if one took the average price paid for electricity in the USA and applied the eGallon approach, it costs about $1.22 to drive an EV the same distance that a vehicle powered by an internal combustion engine (ICE) can travel on a gallon of gasoline.


The eGallon web site states:
"The price of an eGallon tells consumers how much it costs to drive an EV the same distance you could go on a gallon of unleaded gasoline in a similar car. It’s that simple. We take the average distance that a gasoline-powered vehicle can drive on a gallon of gas (28.2 miles for comparable 2012 model year cars), and then calculate how much it would cost to drive the average EV that same distance. Because electricity prices are a little different state to state, our eGallon tool shows how much an eGallon costs in your state, and compares it to the cost of gasoline. As you can see, on average, fueling your car with gasoline costs roughly 3 times more than fueling with electricity." 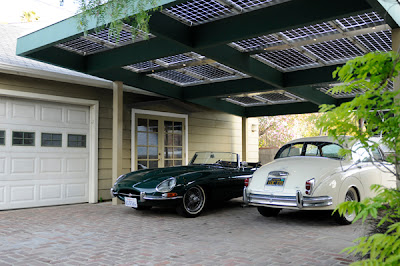 Pic of solar PV car port is via Phatenenergy.com

Now, what we really need to do is focus on creating cleaner sources of electricity. For instance, solar PV and wind power to "fuel" all those electric vehicles will not only emit less pollution than combustion engines, but the way the electricity is generated will also be super clean and green.  (As opposed to nasty coal-fired power plants, for certain.)

Here's to putting the power generation into the hands of the people.  The more solar PV and wind turbines we install to charge our EVs at home, the better.


NOTE: This post was written during my participation in The 2013 Toyota Prius Plug-in MPG Challenge.


From July 12th to Aug 12th, I will be driving a Prius Plug-In Hybrid as part of the 2013 Toyota Prius Plug-in MPG Challenge.  Toyota has partnered with seven prolific environmental influencers (myself included) from the tri-state area for Wave Two of the 2013 Prius Plug-In MPG Challenge – a fun competition to help educate local communities on the benefits of electric vehicles. The winner of the challenge will receive a $2,500 donation to the charity of their choice.