On The Road with the Prius Plug-in Hybrid: Spotlight on Urban Agriculture in Red Hook, Brooklyn, NY

After picking up our Prius for the 2013 Toyota Prius Plug-in-MPG Challenge, Pamela Lippe, Executive Director and President of Earth Day, NY, and I decided to cruise over to Red Hook, Brooklyn to check out two of New York City's coolest urban ag projects.  I drove while Pam served as my trusty wingperson, navigating utilizing the Prius GPS system, and being fun and radiant company to boot.   We were both like kids in a candy shop, not just because we were so excited to be part of this challenge for charities of our choice (see details below this post), but also because we knew we would be able to get to Red Hook from the East River in Lower Manhattan entirely by using only the Prius' battery power!


But, before I take you all to Brooklyn, I wanted to sneak in a few pics from Solar One, where Pamela and I both picked up our individual Prius for the Challenge.


After we parked the Prius Plug-In in Brooklyn, Pamela and I entered through the gates of the 2.75 acre Red Hook Community Farm.  What once had been a decaying, trash-strewn, concrete ball field was now an active farm with a group of diverse Brooklynites working together. Established in 2003, the farm is now a source of hyper local food and immense community pride.  The farm was late in planting this season because it was still recovering from last year's Super Storm Sandy, which literally submerged the whole neighborhood and destroyed much of the farm. 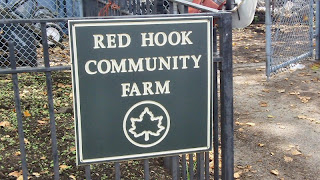 But indeed, despite the flood from Super Storm Sandy, the acres of land we saw were well under way to being back on its feet as a working farm.  This was due in no small part to the huge efforts of many people in the community who rallied together to overcome the devastation.

The juxtaposition of seeing this farm in the midst of such uber urban territory was somewhat surreal.  Especially strange, the farm was just across the street from a huge blue box IKEA store.  It was hard to tell which belonged there more, the immense retail outlet and the surrounding factories, or the farm.  Hopefully, this co-mingling of agriculture and city industry and commerce will be the norm throughout the five boroughs of NYC in the very near future.  For certain, the sometimes gritty, cold asphalt streets and the stone and metal buildings are softened by the earth and vegetation of a farm, making the city less harsh and more welcoming on many levels.

Importantly, urban farming and green roofs can help greatly in minimizing storm water run off, diminishing pollution from entering the waterways of New York. The farm and its porous surfaces absorb water, filter it and return rainwater to the aquifer unlike urban concrete, hard, non-porous surfaces.


The Red Hook Community Farm in Brooklyn was established by the non-profit organization Added Value with the cooperation of Partnership for Parks, The New York City Department of Parks and Recreation. Added Value promotes the sustainable development of Red Hook by nurturing a new generation of young leaders, hosting a variety of youth-focused, green-jobs groups such as Green City Force. The main initiatives of Added Value include farm-based learning, growing a just food system, and empowering youth.

Added Value is a great title for the organization because clearly the group adds tremendous value to the community and is helping revitalize local parks, transforming vacant lands into vibrant Urban Farms, improving access to healthy, safe and affordable food, and growing a local economy that supports the needs of Brooklyn communities.

Ian Marvy, a co-founder, Executive Director of Added Value and a resident of Red Hook, was honored  for his work by Earth Day NY.  John Oppermann, Deputy Director of Earth Day NY, told me Earth Day New York has taken groups of volunteers to help out both on the farm in Red Hook and a flower farm that Added Value operated on Governors Island.

After we left the Red Hook Community farm, Pam and I walked over to the Red Hook Houses, NYC's largest public housing development.  Here, more acres of underutilized land were being transformed into another urban farm that will also educate and employ Brooklyn youth and provide fresh, local food for this urban enclave.

The sprawling Red Hook Houses complex is spread out over 39 acres and has almost 3,000 apartments.  Hopefully soon, the entire complex will be full of plantings for flowers and food to feed the residents and brighten the sometimes barren landscape of public housing into a beautiful landscape that will encourage the residents to participate in the farm initiative outside, even if just by eating healthy produce grown at their own doorsteps.


The farm at the Red Hook Houses was funded by the Center for Economic Opportunity, a NYC agency, and launched in partnership with the non-profit Green City Workforce and Added Value.


Seeing the colorful, hand-painted signs surrounding the composting area at the Red Hook Houses farm and the ever-expanding beds of plantings really lifted my spirits as Pamela and I explored the grounds.


The more areas of New York City that can adapt the lessons learned in Red Hook and execute a community ag plan of their own, the better.

Please check out the pictures below. And, do not miss the uplifting video at the end of this post about the Red Hook Community Farm.  If you watch the video, you just might want to go out and get your hands in the dirt to plant a garden of your own.  Or, better yet, invite a few neighbors who you might have passed on the street, but never had a chance to talk to when you were on the way home to eat take out food alone, to join you in planting a garden.

For the next 30 days (from July 12th to Aug 12th), I will be driving a Prius Plug-In Hybrid as part of the 2013 Toyota Prius Plug-in-MPG Challenge.  Toyota has partnered with seven prolific environmental influencers (myself included) from the tri-state area for Wave Two of the 2013 Prius Plug-In-MPG Challenge – a fun competition to help educate local communities on the benefits of electric vehicles. The winner of the challenge will receive a $2,500 donation to the charity of their choice.  (Check out #Pluginforcharity on Facebook and Twitter.)


The charity I am competing for is New York-based Waterkeeper Alliance, a global movement of on-the-water advocates who patrol and protect over 100,000 miles of rivers, streams and coastlines in North and South America, Europe, Australia, Asia and Africa.

I would like to thank Earth Day NY for facilitating my participation in the Prius Plug-in-MPG Challenge in NYC. Check out Earth Day NY on Facebook.

And, a big shout out to  Element, Times Square West for providing hotel accommodations while I was in NYC for the challenge.

Posted by Paul McGinniss at 5:28 PM